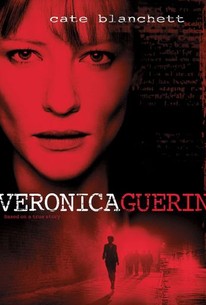 Cate Blanchett gives another great performance in a movie that doesn't shed much light on its title character.

Producer Jerry Bruckheimer and director Joel Schumacher take on the real-life story of an assassinated Irish journalist in the dramatic thriller Veronica Guerin. Cate Blanchett appears as the title character, a relentless crime reporter for The Sunday Independent during the early '90s. Guerin's violent murder in 1996 led to a revision of Ireland's laws and the creation of the Criminal Assets Bureau. The movie picks up with her pursuit of the underground drug trade in Dublin, which she suspects is led by mobster Martin "The General" Cahill (Gerry O'Brien). When Cahill's gang is attacked, she suspects mobster Gerry "The Monk" Hutch (Alan Devine) is responsible. Not deterred by threats or gunshot wounds, she uses thug John Traynor (Ciarán Hinds) as an informer to help out her investigation of psychotic mobster John Gilligan (Gerard McSorley). Schumacher's protégé Colin Farell appears in a small role. ~ Andrea LeVasseur, Rovi

Sarah O'Reilly-Maloney
as Girl Junkie No. 2

Vincent McCabe
as Priest at Funeral

Luke Hayden
as Protection Garda No. 1

Joe Gallagher
as Protection Garda No. 2

Ned Dennehy
as Jamey the Tout

Tommy O'Neill
as Cahill Thug No. 1

Shane McCabe
as Cahill Thug No. 2

Brian McGuinness
as Cahill Thug No. 3

Elizabeth Moynihan
as Newscaster No. 2

Jimmy Greeley
as Newscaster No. 1

Brian Dobson
as Newscaster No. 2

Kevin Reynolds
as Studio Interviewer No. 1

Gerry Ryan
as Studio Interviewer No. 2

Barbara Brennan
as Jealous Journalist No. 1

Gary Lilburn
as Jealous Journalist No. 2

Jane Brennan
as Jealous Journalist No. 3

Frank Smith
as Jealous Journalist No. 4

Malachy McKenna
as Male Officer No. 1

Keiran Hurley
as Male Officer No. 2

Enda Oates
as Warehouse Worker No. 1

Martin Dunne
as Warehouse Worker No. 2

Helen Norton
as Witness Nurse No. 1

Noelle Brown
as Witness Nurse No. 2

Shelly Smith
as Gang Girlfriend No. 1

Grainne Debuitlear
as Gang Girlfriend No. 2

Emily Kelly
as Gang Girlfriend No. 3

Vanessa Keogh
as Hooker No. 1
View All