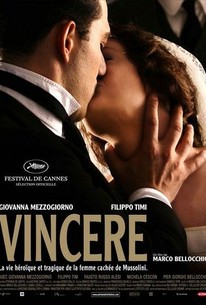 This unusual and offbeat historical drama rests on a little-known conceit. Though seldom discussed in history books (and reportedly undisclosed for half a century), fascist dictator Benito Mussolini conceived an illegitimate son by a woman named Ida Dalser -- a son Mussolini allowed to be born, acknowledged, and then promptly denied for the duration of his life. The tale begins in early 20th century Milan, with Benito (Fabrizio Costella) working as the socialist editor of a controversial newspaper called Avanti. His dream in life involves triumphantly leading the Italian masses away from monarchy and toward a "socially emancipated future." He met the young and wealthy Ida (Giovanna Mezzogiorno) once before, in Trento -- where they enjoyed a brief exchange; they re-encounter one another during Mussolini's period at Avanti and it becomes clear that Ida has fallen deeply in love with Benito. She believes wholeheartedly in his ideals and his future as the leader of Italy -- to such an extent that she sells everything she has (her apartment, furniture, jewelry, and the beauty salon she owns) to fuel the development of his newspaper, Il Popolo d'Italia.While the two become romantically entangled, with Ida positively magnetized by Benito's charisma and Benito hooked on a lust for power, Benito quickly switches spiritual and political allegiances overnight, changing from an atheistic socialist to a deeply Catholic fascist -- Catholic, because an allegiance with the Vatican will enable him to wrest and retain control over Italy's government. Benito and Ida marry and parent a son together, Benito Albino Mussolini (circa 1915), but the marriage certificate soon conveniently disappears and Ida learns, to her horror, that Benito has married someone else. She unwisely begins to protest the situation -- so loudly and persistently that she's first forced into house arrest and then shoved permanently into an insane asylum -- raising key questions about the fate and future of her young son. On a stylistic level, director Marco Bellocchio films this historical material with the passion, theatricality, lyricism, and tragedy of a classical Italian opera. ~ Nathan Southern, Rovi

Bruno Cariello
as The Judge

Giovanna Mori
as The German

Patrizia Bettini
as The Singer

Corinne Castelli
as Tears
View All

Critics Consensus: Wimpy Kid Gets Picked On
View All