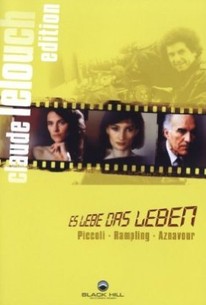 Through a series of convoluted turns, like a tornado going through Kansas, director Claude Lelouch has managed to keep a vacuum at the center of his film. A corporate executive (Michel Piccoli and a young actress (Evelyne Bouix) suddenly disappear and reappear and disappear, almost as fast as blinking Christmas tree lights. Since neither can remember what is going on, it is likely that they are suffering from the classic "I was kidnapped by an extraterrestrial" syndrome. And in fact, that may be the case because it seems that some ETs wanted to speak through these two people to tell earthlings to quit gearing up their nuclear arsenals. Jean-Louis Trintignant plays an acting teacher and Charles Aznavour plays a restaurant owner in this complex story -- yet both stars cannot carry the film on their own merits. For many viewers the labyrinth that wends its way to the final credits is a bit difficult to follow, and at the center of the labyrinth is a woefully inadequate ending. ~ Eleanor Mannikka, Rovi

Marilyne Even
as A Witness
View All

There are no critic reviews yet for Viva la vie! (Long Live Life). Keep checking Rotten Tomatoes for updates!

There are no featured audience reviews for Viva la vie! (Long Live Life) at this time.