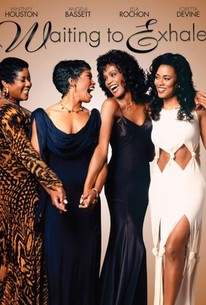 Waiting to Exhale looks at life's ups and downs from an underseen perspective -- albeit one that's poorly served by uneven acting and a sporadically interesting story.

A surprise Hollywood hit, this film is based on the novel of the same name by Terry McMillan and centers on four well-to-do African-American women and their relationships with men and one another. All of them are "holding their breath" until the day they can feel comfortable in a committed relationship with a man. Robin (Lela Rochon) is the long-time mistress of Russell (Leon), who keeps reneging on his promise to leave his wife for her. She dumps him to find a man she can have to herself, but her dates with a reliable but unattractive business partner (Wendell Pierce) and a drug addict (Mykelti Williamson) send her back to Russell. Savannah (Whitney Houston) is a successful television producer who also believes that her married lover Kenneth (Dennis Haysbert) will leave his wife. Bernadine (Angela Bassett) is a wealthy woman who abandoned her own career to raise a family. Her husband is now leaving her to marry a white woman. Gloria (Loretta Devine) is a beauty salon owner and single mother raising a teenage son. After years alone, she falls in love with a new neighbor, Marvin (Gregory Hines). The women share their stories over lunches and conversations at Gloria's salon.

Ken Love
as D.J. at the Hermosa

Wally Bujack
as Judge
View All

News & Interviews for Waiting to Exhale

Critic Reviews for Waiting to Exhale

Audience Reviews for Waiting to Exhale