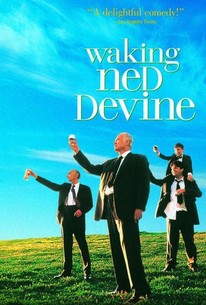 Just as the charming British film The Full Monty told the story of simple men willing to shed their clothes for money, Waking Ned Devine is the story of older Irish men who pursue money and take off their clothes. Commercial director Kirk Jones makes his feature directing debut with a story about a small town in Ireland called Tulaigh More, where one of their 52 inhabitants wins the lotto jackpot of nearly seven million pounds. When nobody claims it, the town goes on a search to find out why. They find the winner, old Ned Devine, dead -- a smile on his face, clutching the winning ticket. Well, in Ireland, the lottery winnings must be claimed by the purchaser, which puts the town in a spot -- if the lottery officials discover Devine dead, he forfeits his money. What ensues is a community coming together in hopes of getting his money to split 51 ways. What they learn is the importance of friendship and the true value of money. To reveal any more would spoil some major surprises, but suffice it to say, it involves aging actors David Kelly, 69, and Ian Bannen, 70, naked. ~ Chris Gore, Rovi

Eamonn Doyle
as Dicey, The Fiddleman

Rennie Campbell
as Rennie
View All