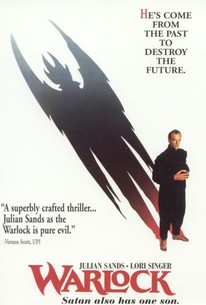 Julian Sands oozes maleficence as a warlock of the 1600s cast forth to 1980s Los Angeles, where he continues to work his deviltry. The story begins in 1691 Boston when a warlock is condemned to die. Calling for Satan's help, the warlock is sent forward in time to contemporary Los Angeles, where he comes crashing through the window of Kassandra (Lori Singer) and her roommate Chas (Kevin O' Brien), who think that the warlock is a LA drunk and let him stay the night to sleep it off. The next day, the warlock brutally murders Chas and then locates a spiritualist (Mary Woronov) who, possessed by the devil, tells the warlock that he must find the three parts of the Grand Grimoire, the witches' bible that contains the secret name of God. Meanwhile, Kassandra, grieving over the death of Chas, comes upon Giles Redferne (Richard E. Grant), a warlock hunter from the 16th century, sent into the future to find the warlock. While Giles is busily putting together a "witch-compass" to track the warlock, Kassandra calls the police and has him arrested. But then the warlock returns and puts a curse on Kassandra. She blacks out, only to awaken the next morning to discover that she has aged twenty years. Realizing she has put the wrong representative from the 16th century in jail, she bails out Giles and they both go in search of the warlock.

Julian Sands
as The Warlock

Wendy Feiner
as Passenger
View All