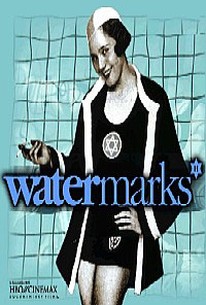 Watermarks is a moving and fascinating look at how the Nazi-fication of Germany in the 1930s affect a group of Jewish women swimmers.

This is the story of the champion women swimmers of the legendary Jewish sports club, Hakoah Vienna. Founded in 1909 in response to the notorious Aryan Paragraph, which forbade Austrian sports clubs from accepting Jewish athletes, Hakoah rapidly grew into one of Europe's biggest athletic clubs, with its members achieving astonishing success in many diverse sports. In the 1930s Hakoah's best-known triumphs came from its women swimmers, who dominated national competitions in Austria. After the Anschluss in 1938, the Nazis shut down the club, but the swimmers all managed to flee the country before the war broke out. Sixty-five years later, members of the swimming team reunite in their old swimming pool in Vienna, a journey that evokes memories of youth and femininity and strengthens lifelong bonds. Told by the swimmers, now in their 80s, the chronicle is about a group of young girls with a passion to be the best. It is the saga of seven outstanding athletes who still swim daily as they age with grace. Above all, it is a celebration of life.

There are no featured audience reviews for Watermarks at this time.