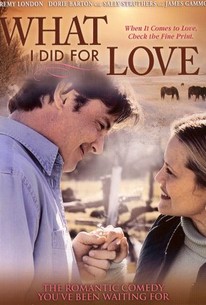 What I Did for Love

What I Did for Love Ratings & Reviews Explanation

What I Did for Love Photos

A Los Angeles defense attorney discovers that in order to marry the love of his life, he'll first have to convince her rugged father that all lawyers aren't sharks. James White (Jeremy London) is a successful young lawyer who will soon be happily married if all goes as planned. Deeply in love with country-bred doctor Sadie Ryder (Dorie Barton), James plans on asking for his true love's hand in marriage when the pair head back to rural Pine Gap to celebrate Christmas with her family. Trouble is, Sadie's gruff father Karl (James Gammon) doesn't care much for city boys, and the less said about his opinion of lawyers the better. Over the course of the next week, James is prepared to do everything in his power to win Karl over, whether it be baling hay with the good old boys or heading out for the hunt despite the fact that he's never fired a gun. All the while, Sadie's well-meaning Aunt Trudy (Sally Struthers) does her best to convince her niece to date a real man, like the girl's rough-and-tumble high school sweetheart Clint (John Littlefield). Later, when a group of environmentalists hatch a plan to turn the county into a national park, it appears that the days of Ryder Ranch may be numbered. While James realizes that a good lawyer to help get the family out of their current jam, he realizes that Sadie's father isn't willing to listen to reason. Still determined to impress Karl and win Sadie's hand in marriage, James hastily sets out into the wilderness in order to prove that he can live off the land with the best of them. By the time the rescue team is called, few will doubt that James' love for Sadie is genuine.

Steve Monroe
as Jake
View All

Critic Reviews for What I Did for Love

There are no critic reviews yet for What I Did for Love. Keep checking Rotten Tomatoes for updates!

Audience Reviews for What I Did for Love

There are no featured audience reviews for What I Did for Love at this time.

What I Did for Love Quotes