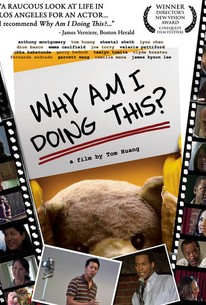 Why Am I Doing This?

Why Am I Doing This? Ratings & Reviews Explanation

Two young performers have to deal with racial stereotyping along with the countless other stumbling blocks to establishing a successful career in this independent comedy from director Tom Huang. Lester Niles (Anthony Montgomery) is a struggling stand-up comic who deals in dry observational humor. However, Lester is also African-American, and audiences and comedy club bookers are often puzzled about why his material isn't more "black," while his manager and half-brother Kenny (Joe Torry) urges him to sound more like Martin Lawrence. Adding to his frustrations, Kenny is in love with Nira (Sheetal Sheth), who clearly likes him but doesn't take him seriously as a boyfriend. Lester is good friends with Tony Chang (Tom Huang), an aspiring actor who is Asian-American and sick of getting auditions for roles as sushi chefs, delivery boys or exchange students. Tony's parents are tired of his career getting nowhere, his older sister Donna (Tamlyn Tomita) is a successful businesswoman who thinks Tony should quit show biz for a desk job, and his younger brother Danny (Dion Basco) is a would-be rapper and street racer. And Tony has his own romantic problems, as he's torn between Katie (Lynn Chen), a fellow struggling actor he meets while they're both working a children's party, and Amber (Emma Caulfield), who is blonde and beautiful but more interested in borrowing Tony's car than a long-term relationship. Why Am I Doing This? won the "New Visions" Award at the 2009 Cinequest Film Festival.

Critic Reviews for Why Am I Doing This?

Audience Reviews for Why Am I Doing This?

There are no featured audience reviews for Why Am I Doing This? at this time.

Why Am I Doing This? Quotes