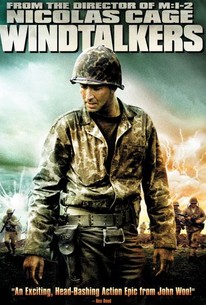 The action sequences are expertly staged. Windtalkers, however, sinks under too many clichés and only superficially touches upon the story of the code talkers.

Loosely based on a real-life operation during World War II, this action-adventure from director John Woo stars Nicolas Cage as Joe Enders, a Marine traumatized by the loss of his entire platoon in the Solomon Islands during an ambush he believes was deadlier than necessary due to his indecision. Suffering from eardrum damage in Hawaii, Joe manages to be declared fit for duty once again thanks to a sympathetic nurse (Frances O'Connor), but his new assignment isn't what he expects. Joe is ordered to safeguard a Navajo soldier named Ben Yahzee (Adam Beach) because the military has developed a new secret code based on the near-dead Navajo language that is proving unbreakable to the Japanese. Any soldier that speaks Navajo is an immediate asset, including Ben and his pal, Charlie Whitehorse (Roger Willie). Joe's orders are to "baby sit" Ben during the invasion of Saipan, protecting him if possible, but -- if the code-talker's capture becomes imminent -- to kill him before he falls into enemy hands. Meanwhile, Charlie is to be guarded by affable harmonica player Ox Henderson (Christian Slater). Joe reluctantly accepts this new duty as a way to get back into the war, and in the ensuing carnage, his nearly suicidal acts of bravery make him a hero while Ben becomes paralyzed by fear. Determined to live up to Joe's example, Ben musters up his courage, even in the face of racism from a fellow soldier (Noah Emmerich), and ends up rescuing his own protector behind enemy lines by briefly posing as a Japanese soldier. Despite their growing mutual respect, Joe is eventually forced to take an action that threatens to shatter his bond with Ben, as the war's tragic losses strike closer to home for both men. Windtalkers co-stars Peter Stormare, Jason Isaacs, and Mark Ruffalo.