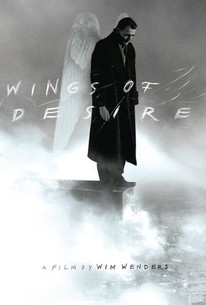 Beyond ravishing, Wings of Desire is Wim Wenders' is aching and heartbreaking exploration of how love makes us human.

Damiel (Bruno Ganz) and Cassiel (Otto Sander) are angels who watch over the city of Berlin. They don't have harps or wings (well, they usually don't have wings) and they prefer overcoats to gossamer gowns. But they can travel unseen through the city, listening to people's thoughts, watching their actions and studying their lives. While they can make their presence felt in small ways, only children and other angels can see them. They spend their days serenely observing, unable to interact with people, and they feel neither pain nor joy. One day, Damiel finds his way into a circus and sees Marion (Solveig Dommartin), a high-wire artist, practicing her act; he is immediately smitten. After the owners of the circus tell the company that the show is out of money and must disband, Marion sinks into a funk, shuffling back to her trailer to ponder what to do next. As he watches her, Damiel makes a decision: he wants to be human, and he wants to be with Marion, to lift her spirits and, if need be, to share her pain. Wim Wenders' Wings of Desire is a remarkable modern fairy tale about the nature of being alive. The angels witness the gamut of human emotions, and they experience the luxury of simple pleasures (even a cup of coffee and a cigarette) as ones who've never known them. From the angels' viewpoint, Berlin is seen in gorgeous black-and-white -- strikingly beautiful but unreal; when they join the humans, the image shifts to rough but natural-looking color, and the waltz-like grace of the angels' drift through the city changes to a harsher rhythm. Peter Falk appears as himself, revealing a secret that we may not have known about the man who played Columbo, and there's also a brief but powerful appearance by Nick Cave & the Bad Seeds. Wings of Desire hinges on the intangible and elusive, and it builds something beautiful from those qualities.

Crime and the City Solution

Peter Falk
as Himself

Didier Flamand
as Angel at the library

Dirk Vogeley
as On the highway

Nick Cave
as Himself

Blixa Bargeld
as Member of Nick Cave and the Bad Seeds

News & Interviews for Wings of Desire

Critic Reviews for Wings of Desire

Audience Reviews for Wings of Desire