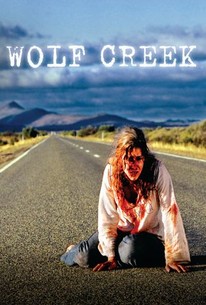 Though Wolf Creek is effectively horrific, it is still tasteless exploitation.

A dream vacation turns into a nightmare in this taut thriller from Australia. Ben (Nathan Phillips), Lizzie (Cassandra Magrath), and Kristy (Kestie Morassi) are three friends who, after a night of celebratory drinking, hit the road for a trip to Wolf Creek National Park, where they plan to spend a week hiking and surfing. The three friends are happy to be spending time together, especially after Ben makes the happy discovery that Lizzie is as infatuated with him as he is with her. However, after a long day on foot, Ben, Lizzie, and Kristy make the unpleasant discovery that their car's battery is dead, leaving them stuck in the middle of nowhere. Help arrives in the form of Mick (John Jarratt), a burly but good-natured outdoorsman who happens upon them; Mick tells them that he can fix their car, and offers to give them a ride to his place down the road. Grateful but a bit nervous around the gregarious stranger, Ben, Lizzie, and Kristy offer Mick a wealth of thanks for his help, and give him some money for his troubles before they fall asleep around the campfire. The next morning, the travelers find themselves bound, gagged, drugged, and separated from one another, and they realize Mick is not the good Samaritan they imagined. Wolf Creek was the first feature film from writer and director Greg McLean. ~ Mark Deming, Rovi