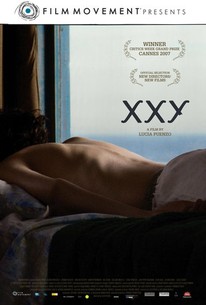 This sharp directorial debut by Lucia Puenzo treats the challenging subject of intersexuality with intelligence and sensitivity.

Lucia Puenzo's drama XXY probes the psychological aftereffects that adolescent transsexuality can yield. With a name easily applicable to either gender, young teenager Alex's (Ines Efron) hermaphroditic physiology causes a massive identity crisis and severe emotional withdrawal. The problems create social problems in the family's home of Argentina and virtually force Alex and his/her sympathetic parents, Kraken (Ricardo Darín) and Suli (Valeria Bertuchelli) to move to nearby Uruguay, at a point when Alex wrestles with the throes of puberty. The situation grows increasingly complex when several friends of the family arrive: marrieds Erika (Carolina Pelereti) and Ramiro (German Palacios), a plastic surgeon, and their adolescent son, Alvaro (Martin Piroyanski), whom Alex instantly propositions for sex. As Alex battles some local punks who try unsuccessfully to rape him/her (saved at the last minute by Kraken), Alvaro finally accepts Alex's promptings for intercourse and comes to a gradual realization of his own gayness. Meanwhile, the rift between the adults and the youth widens with increasing rapidity. ~ Nathan Southern, Rovi

Lucas Escariz
as Saul
View All

Now Streaming: The Americans, Dope, Justified, and More
View All