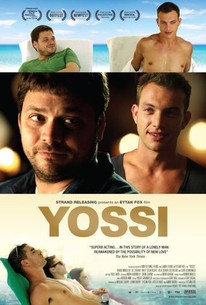 Smart, moving, and deeply empathetic, Yossi is a thoughtful examination of love and grief.

Following the death of Jagger, Dr. Yossi Hoffman (Ohad Knoller, Yossi and Jagger, Munich) has become a valued and dedicated workaholic cardiologist who lives a solitary existence as a closeted gay man in Tel Aviv. His world is shaken when a middle-aged woman from his past (Orly Silbersatz, Broken Wings) walks into his examination room. Their brief and distressing reunion along with troubles at work, spur Yossi to take an overdue vacation. On a road trip to Eilat, a chance encounter with a group of young Israeli IDF officers, among them Tom (rising star Oz Zehavi, Southland) a handsome and openly gay man, allows Yossi to move on from his grief and begin to live again. One of Israel's most noted directors and best chroniclers of gay life, Eytan Fox was born in New York and moved to Israel at an early age. He graduated from Tel Aviv University's School of Film and Television. His previous film, the Berlin International Film Festival and LA Outfest Award Winner The Bubble, follows three roommates in Tel Aviv, a political activist and two gay men, one of whom (played by YOSSI's Ohad Kneller) falls in love with a Palestinian. Mr. Fox's Walk on Water starred YOSSI's Lior Ashkenazi as a Mossad officer under cover confronting the Nazi past of an upper class young German man. (c) Strand