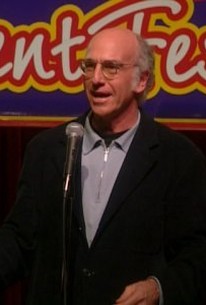 The Thong
Curb Your Enthusiasm Season 2

Larry (Larry David) is talking to his therapist, Dr. Weiss (John Pleshette), about his marital problems. He says he doesn't share interests with Cheryl (Cheryl Hines), who, for example, likes the outdoors. "It's not a good place for bald people," he explains. Dr. Weiss recommends that Larry go to the beach with Cheryl sometime, to make her happy. Larry runs into director Rob Reiner in the waiting room, and Reiner asks if he can auction off lunch with Larry as part of a celebrity auction for "Groat's Syndrome," which makes people uncontrollably hyperactive. Larry reluctantly agrees. Later, Cheryl is delighted when he suggests they go to the beach. Larry is already dreading it. "What do you do?" he asks Cheryl, "You lie down on a blanket?" Disaster strikes when they go to the beach that weekend. Larry spots Dr. Weiss in the distance, wearing a very revealing bathing suit. "Can we go?" he asks Cheryl as he cowers in the sand, afraid to be seen, "Let's just go." Back in the city, he discusses the incident with Richard Lewis, who recommended Dr. Weiss. Lewis is distraught. They both decide they have to terminate therapy with Weiss. "You should thank me," says Larry, "I'm saving you from this hedonist giving you advice." Then Larry is off to his auction lunch with John Tyler (Tom McGowan). Larry tries too hard to entertain and Tyler is unamused. When Larry's lunch order comes before Tyler's, Larry asks if he can start eating. Tyler says no, and they get into a heated argument. This episode was directed by Jeff Garlin, who plays Jeff, Larry's manager on the show. There's also another cameo by executive producer Robert B. Weide, who frequently directs the show. He's the man standing backstage with Larry during the talent show. 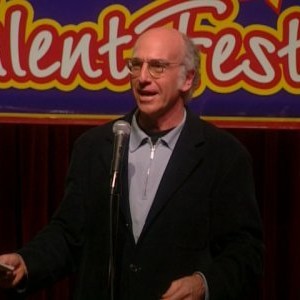