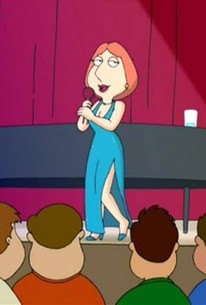 Stewie (voice of Seth MacFarlane) has begun teething, and is in such pain that he orders Lois (voice of Alex Borstein) to kill him. "Shake me!" he commands, "Shake me like a British nanny!" Unable to convince Lois to end his pain thusly, he decides to build a time machine to take him back to before his teeth started to come in. Lois actually manages to get Peter to contribute to the household by taking Chris (voice of Seth Green) to his soccer game. When another parent (voiced by Alex Rocco) screams at Chris for his poor play, Peter punches the man, only to learn that the man was actually a woman, and a pregnant woman to boot. Peter ends up under house arrest. He quickly gets bored watching television. "All the shows are starting to run together," he comments. Sure enough, he finds himself watching an episode of "Homicide: Life on Sesame Street," which features a bitter domestic dispute between Bert and Ernie. Peter decides to lure his friends over to the house by building a bar in the basement. "I feel just like Tim Allen," he declares, "I build stuff and I have a criminal record." But he's disturbed when Lois comes downstairs and starts performing sexy numbers for his "patrons," and develops a following of his lustful friends and neighbors. This episode also features the voice talents of Leslie Uggams. 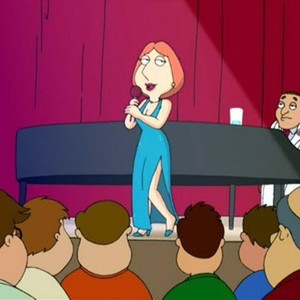