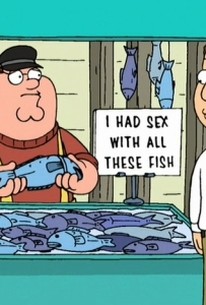 Since he lost his job, Peter (voice of Seth MacFarlane) has gained a lot of weight from sitting on the couch watching television. After a walk on the pier with Brian (MacFarlane), he decides to become a fisherman. "That's how a real New England man makes his living," he reasons. He buys a boat at a police auction for 50,000 dollars, only to learn that its previous owner, Salty, died while chasing after "Daggermouth," the man-eating bluefish. Peter then goes to "Jim's Bank" for a loan so he can pay for his boat. He soon runs into conflict with Henessey, a veteran fisherman who resents the newcomer. Peter's having a hard time earning a living, and to make matters worse, he failed to read the loan papers he signed, and the bank is repossessing everything the family owns. Meanwhile, Meg (voice of Mila Kunis) is distraught about missing out on spring break. In an effort to placate her, Lois (voice of Alex Borstein) takes her to a fancy spa. When that doesn't do the trick, Lois drives Meg to spring break. Meg is embarrassed to be seen there with her mother, and it only gets worse when Lois parties her way to popularity among Meg's peers, neglecting her daughter in the process. While Lois and Meg negotiate their bacchanal, Peter is desperate to come up with the money to keep their home from being taken by the bank. When he learns that there's a 50,000-dollar bounty on Daggermouth, he and his friends set out to capture the dreaded beast. This episode features the vocal talents of Michael Chiklis and Brian Doyle Murray.