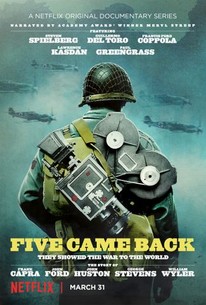 Five Came Back: Miniseries
97%
Critics Consensus: Five Came Back tells an inspiring story to captivating effect, offering viewing that should appeal to historians and film buffs in equal measure.

News & Interviews for Five Came Back

View All Five Came Back News