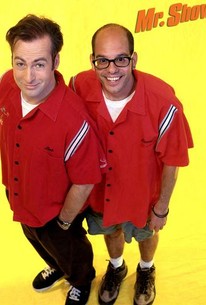 Bush Is a P.
Mr. Show With Bob and David Season 3

This episode of Mr. Show opens with comedian Kedsie Matthews (Tom Kenny) filling in for Bob Odenkirk on-stage while Bob runs some errands. When Kedsie, who's an annoying cross between Robin Williams and Carrot Top, strays from the script and starts "riffing," the Mr. Show audience loves it, and David Cross encourages him. Odenkirk catches the show while grocery shopping, and storms back, outraged. "I go to the store to get some eggs and you let this guy take over?" he chastises Cross. Cross calls Kedsie "hilarious," and fires Odenkirk. Then he fires himself. When Odenkirk protests that he's funnier than Kedsie, Cross points out that Kedsie makes more money, which leads into a sketch about "the Worthington Law," which is "More money = Better than." As explained by Carl Espick of Value Magazine, this means that Darryl Strawberry is a better person than St. Francis of Assisi. There's also a sketch about a successful executive, Ted (Odenkirk), whose former Siamese twin, Ned (Cross), wants them to be surgically reattached, because things aren't working out for him. There are flashbacks of Ted playing quarterback at school while Ned smokes pot, and of Ted returning home from combat attached to antiwar protester Ned. Later, in a skit parodying Amadeus, Cross plays Salini, a mediocre composer of marching band music who is tormented by the brilliance of idiot-savant marching music genius John Baptiste Philouza (Odenkirk). Salini responds to Philouza's tuneless humming, saying his "music revealed a world of unimaginable beauty. Was this God and the angels conversing? Or was it the Devil? Or was it God and the Devil...interrupting each other?" Salini ends up beating Philouza in a contest, because the judge is worried that "brilliance upsets people." The episode ends with an animated guest appearance from Comedy Central's Jonathan Katz.