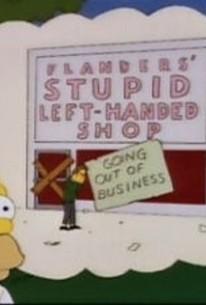 When Flanders Failed
The Simpsons Season 3

Homer Simpson (voice of Dan Castellaneta) has never much cared for his next-door neighbor, the aggressively cheerful, born-again Christian Ned Flanders (voice of Harry Shearer). But it's not in Homer's nature to turn down barbecue, so he grudgingly tags along when Ned invites the Simpsons to a cookout. As it turns out, Ned uses the occasion to announce he's given up his job as a pharmaceutical salesman to open his own business, a shop called the Leftorium that specializes in gadgets for southpaws. Homer wins a wishbone-pulling contest with Ned, and in a fit of pique wishes to himself that Ned's business becomes a dismal failure. However, when the Leftorium falls on hard times and the Flanders family is reduced to living out of their car, Homer wonders if Lisa (voice of Yeardley Smith) might have a point about the dangers of "shameful joy." Meanwhile, Bart (voice of Nancy Cartwright) begins taking karate classes, but loses interest when he learns he'll have to read a book rather than break stuff -- which becomes a problem when he tries to fool the family into thinking he's still attending class. "When Flanders Failed" was first aired on October 3, 1991. 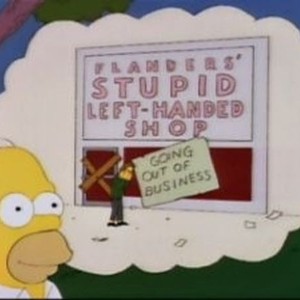