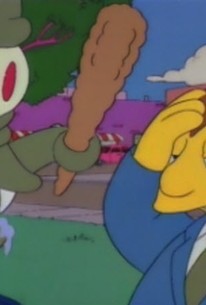 In the second annual Halloween spookfest from The Simpsons, Bart (voice of Nancy Cartwright) and Lisa (voice of Yeardley Smith) pig out on candy after trick-or-treating, against the advice of their mother Marge (voice of Julie Kavner). Soon the two kids are having nightmares, as is their father Homer (voice of Dan Castellaneta), never one to stay away from sweets. In Lisa's Nightmare, a parody of the classic tale The Monkey's Paw by W. W. Jacobs, the Simpsons are vacationing in Morocco when Homer buys a monkey's paw that he is told can make wishes come true. The Simpsons, however, don't use it very responsibly (no great surprise there), leading to misery, disappointment, and an alien takeover. Bart's Nightmare is a take-off on the Twilight Zone episode "It's A Good Life," in which Bart is a monster-child who can make his every wish come true, which makes him hell to be around, especially for Homer after Bart transforms him into a Jack-in-the-Box. And in Homer's Nightmare, Homer is fired by C. Montgomery Burns (voice of Harry Shearer), but that's not the half of his problems -- Mr. Burns and his sidekick Smithers (voice of Shearer) then steal Homer's brain to use in a robot they imagine will be the perfect worker. Appropriately enough, "Treehouse of Horror II" first aired on October 31, 1991. 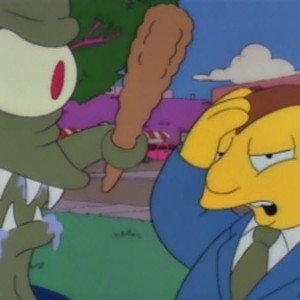