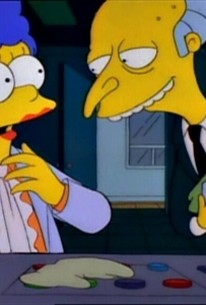 Marge Gets a Job
The Simpsons Season 4

The Simpson family's home is in sad shape -- the house has slipped from its foundation, and has begun sliding on an angle into the ground. Surly Joe, proprietor of the only foundation-repair firm in town, tells Homer (voice of Dan Castellaneta) and Marge (voice of Julie Kavner) that it will cost 8,500 dollars to set the house right. This is more than the family budget can handle at the moment, so Marge decides to look for a job. After Lisa (voice of Yeardley Smith) encourages Marge to beef up her resumé with a creative approach to the facts, she lands a job at the Springfield Nuclear Power Plant, where Homer works. It isn't long before C. Montgomery Burns (voice of Harry Shearer), the ancient and ill-tempered owner of the plant, develops a powerful infatuation with Marge, and he's willing to do whatever he must to win her heart away from her husband, including a candlelight dinner with music from Marge's favorite singer, Tom Jones (performing his own voice), who has been specially kidnapped for the occasion. Meanwhile, Bart (voice of Nancy Cartwright) discovers his habit of telling tall tales is catching up with him when he finds himself trailed by an escaped wolf -- but given his history of spinning whoppers, no one believes him. "Marge Gets a Job."