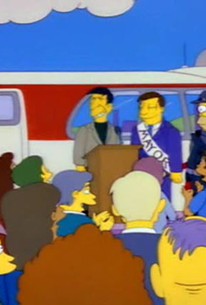 Marge vs. the Monorail
The Simpsons Season 4

After C. Montgomery Burns (voice of Harry Shearer) is found guilty of dumping toxic waste from the Springfield Nuclear Power Plant in a city park, he's fined $3 million, which he pays at once, in cash. With a sudden and unexpected budget surplus, the good people of Springfield are trying to decide what to do with the money when smooth-talking salesman Lyle Lanley (voice of Phil Hartman) convinces the town that what they need is a monorail system. Marge Simpson (voice of Julie Kavner), however, is against the idea and has reason to believe that Lanley is pulling a fast one on the city, even though Homer (voice of Dan Castellaneta) has already enrolled in monorail conductor's school. Marge discovers that the monorails Lanley constructed in other cities were not only faulty but dangerous, and she must race back to Springfield before someone gets hurt and before Lanley gets away with the money. Leonard Nimoy makes a guest appearance as a celebrity attending the monorail dedication (whom Mayor Quimby mistakes for one of the Little Rascals). "Marge Vs. The Monorail" first aired on January 14, 1993.

Marge vs. the Monorail Photos 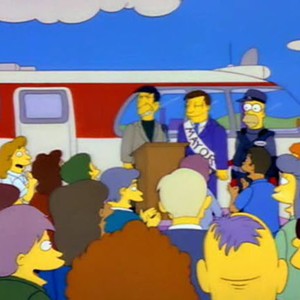 Critic Reviews for Marge vs. the Monorail

It is by far one of the most loved episodes of The Simpsons and can safely be called a classic by any fan.