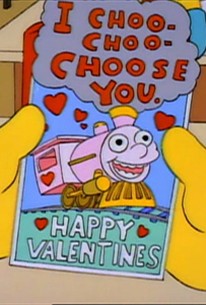 I Love Lisa
The Simpsons Season 4

Valentine's Day has come to Springfield Elementary School, and while the rest of his classmates have gotten cards from their fellow students, intellectually challenged Ralph Wiggum (voice of Nancy Cartwright) hasn't received a single valentine. Lisa (voice of Yeardley Smith) feels sorry for poor Ralph, so she erases the name from a card she was given and passes it along to Ralph. Convinced she likes him, Ralph quickly develops a major crush on Lisa, but the more time she spends with Ralph, the more Lisa is convinced she doesn't feel anything for him but a mixture of annoyance and pity. Ralph tries to win Lisa's heart with Malibu Stacy accessories and tickets to the Krusty the Clown Anniversary Special, where Lisa is prodded into admitting on the air that she doesn't like Ralph, breaking his heart. Lisa feels awful about hurting Ralph's feelings, and her heart sinks even deeper when she discovers she has won the female lead in the school play, portraying Martha Washington -- and that her leading man will be Ralph, cast as George. I Love Lisa was first aired on February 11, 1993, just in time for Valentine's Day. 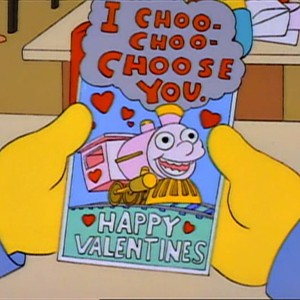