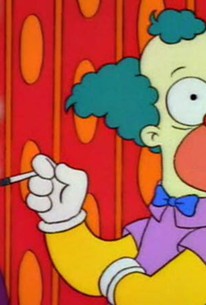 Krusty Gets Kancelled
The Simpsons Season 4

The citizens of Springfield are being inundated with advertisements heralding the arrival of something called "Gabbo," raising curiosity to a fever pitch. One day, it is revealed that Gabbo is the irrepressible wooden sidekick of ventriloquist Arthur Crandall (voice of Hank Azaria), and that they are to star in a new television show. However, much to the dismay of Bart (voice of Nancy Cartwright) and Lisa (voice of Yeardley Smith), Gabbo's show is scheduled to air opposite that of their favorite entertainer, Krusty the Clown (voice of Dan Castellaneta), and soon Krusty's ratings sink through the floorboards as Gabbo leaps to unprecedented success. Krusty's show is dropped from the schedule, and after his career as a professional gambler hits the skids, Krusty is left with nowhere to go. Eager to help their fallen hero, Bart and Lisa suggest that Krusty stage a comeback special, featuring some of the big-name stars he's become friendly with during his years in show business. Krusty hands his address book to Bart and Lisa and asks them to get to work rounding up talent, while he attempts to lose the weight he put on with a steady diet of milkshakes. Appearing on Krusty's TV special are Bette Midler, Johnny Carson, Hugh Hefner, Luke Perry, and The Red Hot Chili Peppers, all of whom perform their own voices; Barry White and Elizabeth Taylor also provide voice cameos for the episode. "Krusty Gets Kancelled" first aired on May 13, 1993. 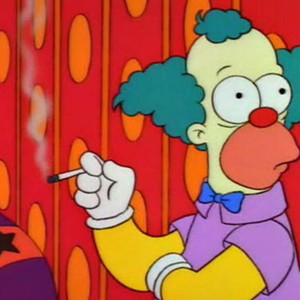