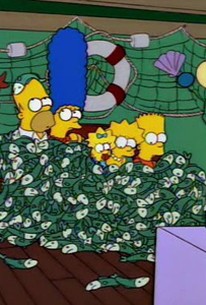 Former highbrow children's entertainer and failed criminal genius Sideshow Bob (voice of Kelsey Grammer) has once again won parole, and decides to get revenge against the person who twice put him behind bars: Bart Simpson (voice of Nancy Cartwright). While Bob convinces the authorities that he means no harm to his young nemesis (explaining that his "Die, Bart, Die" tattoo is actually a German expression, "The, Bart, The"), it doesn't take long for Bart to figure out that Bob is the man who's been sending him threatening letters written in blood. After Bob begins stalking Bart and his family, the FBI enrolls the Simpsons in the Witness Relocation Program; renamed the "Thompsons," Homer (voice of Dan Castellaneta) and Marge (voice of Julie Kavner) move the kids to a houseboat in the riverfront community of Cape Feare. However, Bob manages to hitch a ride on the underside of the family car, and soon Bob is battling Bart "Thompson" mano a mano as the family's home floats down the river. "Cape Feare" first aired on October 7, 1993. 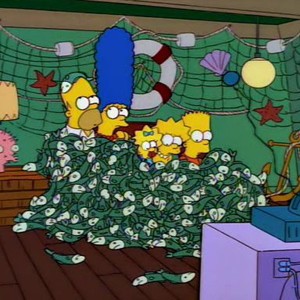