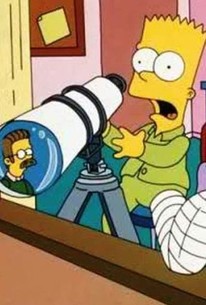 Bart of Darkness
The Simpsons Season 6

After taking advantage of a community "pool on wheels" that rolls into their neighborhood during a summertime heat wave, Bart (voice of Nancy Cartwright) and Lisa (voice of Yeardley Smith) decide to badger Homer (voice of Dan Castellaneta) and Marge (voice of Julie Kavner) into getting a swimming pool. The new pool makes the Simpsons the most popular family in the neighborhood, but Bart doesn't get much of a chance to enjoy his new status; he soon breaks his leg while trying to dive into the pool from his tree house. For the most part confined to his room, Bart wiles away his time by spying on the neighbors with a telescope, and one night he sees Ned Flanders (voice of Harry Shearer) digging what looks like a grave in his back yard. Bart then overhears Ned saying "I'm a murderer!" and comes to the conclusion that Ned has snapped and killed his wife, Maude (voice of Maggie Roswell). Bart and Lisa soon start playing detective, determined to uncover the evidence of Ned's wrongdoing. "Bart of Darkness" was first aired on September 4, 1994. 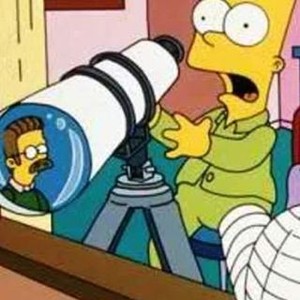