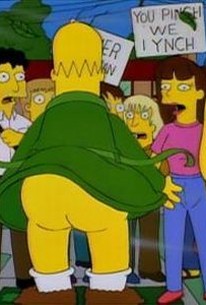 When the annual Candy Industry Trade Show comes to Springfield, noted sugar enthusiast Homer Simpson (voice of Dan Castellaneta) arrives to load up on free samples, with his embarrassed wife, Marge (voice of Julie Kavner), in tow. Homer's feeble willpower is quickly stretched to the breaking point, and he swipes the rarest item at the show -- a gummy Venus de Milo, "carved by gummy artisans who work exclusively in the medium of gummy." After arriving home from the show, Marge asks Homer to give the babysitter, feminist-minded college student Ashley Grant (voice of Pamela Hayden), a ride home. As Ashley is getting out of the car, Homer notices the precious gummy Venus de Milo is stuck to her bottom, and he quickly peels it off; Ashley is certain Homer was making a sexual advance, and accuses him of harassment. As Ashley and a group of protesters set up camp on the Simpsons' front lawn, a tabloid TV reporter interviews Homer, and through the magic of editing makes him sound like a subnormal degenerate, so suddenly Homer is the pariah of the community. "Homer Badman" also features the voice of Dennis Franz, who stars in a quickie TV movie modeled after Homer's notoriety, "Homer S.: Portrait of an Ass-Grabber." The episode first aired on November 24, 1994. 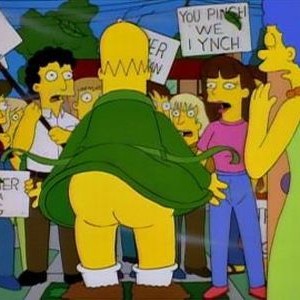