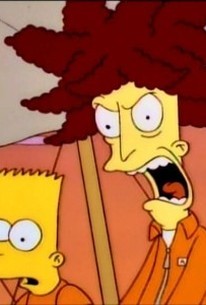 Children's entertainer turned criminal genius Sideshow Bob (voice of Kelsey Grammer) has come to the belated conclusion that television and its ruinous effect on our culture is to blame for his problems, and while cleaning up trash at an Air Force base in Springfield shortly before an air show is to begin, he decides to take dramatic action against the idiot box. After outwitting Col. Leslie "Hap" Hapablap (voice of R. Lee Ermey) and his underlings, Sideshow Bob is able to take over a hangar where a number of old nuclear warheads are being stored, and he holds Springfield at ransom, demanding that all television broadcasting be halted or he'll blow up the city. The Simpsons are on hand to attend the air show, and Bart (voice of Nancy Cartwright) and Lisa (voice of Yeardley Smith) are separated from Homer (voice of Dan Castellaneta) and Marge (voice of Julie Kavner) in the confusion, and as a result Bart and Lisa are soon attempting to foil Sideshow Bob's mad schemes. Meanwhile, Krusty the Clown (voice of Dan Castellaneta), realizing he'd have the airwaves all to himself, commandeers an Emergency Broadcasting System booth and beings offers round-the-clock minimalist comedy. "Sideshow Bob's Last Gleaming" was first broadcast on November 26, 1995. 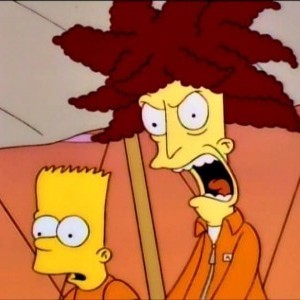