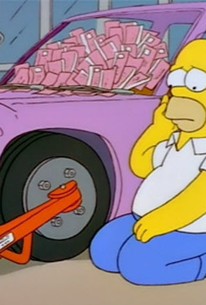 The City of New York vs. Homer Simpson
The Simpsons Season 9

When Homer Simpson (voice of Dan Castellaneta) and his friends arrive at Moe's Tavern for an evening of beer drinking, Moe Szyslak (voice of Hank Azaria) tells them that they need to name a designated driver before he can serve them. Barney Gumble (also voiced by Castellaneta) unfortunately gets the nod moments before Duffman (voice of Hank Azaria) arrives in the Duff Beer Party Mobile to present Moe's patrons with "a giant, bottomless mug of new Duff Extra Cold!" While Barney stays sober that evening, after dropping off his friends he takes off in Homer's car on a bender that lasts two months. Shortly after Barney returns, Homer gets word that his car is illegally parked in New York City, and that he has 72 hours to pick it up before it's tossed into the East River. Homer has only negative memories of the Big Apple after a brief visit when he was a teenager, but Marge (voice of Julie Kavner), Bart (voice of Nancy Cartwright) and Lisa (voice of Yeardley Smith) would all like to visit the big city, so they tag along as Homer heads to Manhattan to pick up his ride. While Marge and the kids see the sights and take in a Broadway show, Homer waits for one of New York's finest to arrive, which takes longer than he expected. "The City Of New York vs. Homer" was first aired on September 21, 1997, kicking off Season Nine of The Simpsons.

The City of New York vs. Homer Simpson Photos 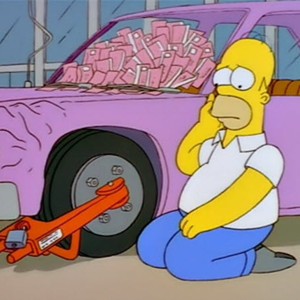