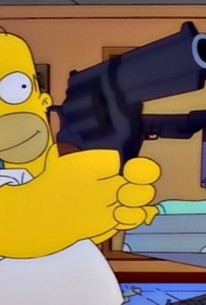 The Cartridge Family
The Simpsons Season 9

Professional soccer comes to Springfield when Portugal and Mexico's nation teams arrive for an exhibition match, and in the great tradition of British football Groundskeeper Willie (voice of Dan Castellaneta) starts a riot in the stands that sweeps through the city. Convinced he needs to protect his family, Homer Simpson (also voiced by Castellaneta) decides to buy a gun, though his wife Marge (voice of Julie Kavner) strongly objects to having it in the house. Homer decides to join the National Rifle Association and brings Marge along to a meeting to convince her guns are safe; however, the presentation does nothing to quell her fears, and when Homer starts using his pistol at the dinner table, she informs him either the gun goes or she does. Homer backs down, but hides the weapon rather than getting rid of it, and when she finds it in the refrigerator's vegetable crisper, she packs up the kids and leaves. Homer turns to his friends in the NRA for moral support, but they're as appalled by faulty grasp of gun safety as Marge, and soon he's left with nothing but his firearm for company. "The Cartridge Family" first aired on November 2, 1997. 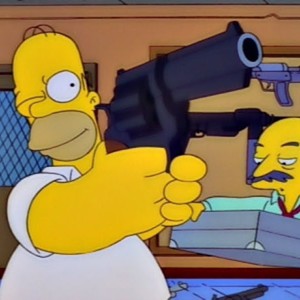