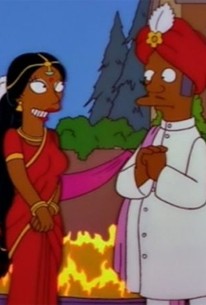 Convenience-store magnate Apu Nahasapeemapetilon (voice of Hank Azaria) is drafted at the last minute into participating in a charity bachelor auction, and makes a surprising impression on the single women in attendance. Apu suddenly finds he's Springfield's most eligible bachelor, and is enjoying the attention until he is contacted by his mother (voice of Andrea Martin), who reminds him that's he's pledged to marry a girl named Manjula (voice of Jan Hooks) in a marriage that was arranged when he was a boy. Apu foolishly asks Homer (voice of Dan Castellaneta) for advice, and he suggests Apu tell his mother he's already married. Apu thinks he's off the hook until his mom appears at the Kwik-E-Mart, wanting to meet her daughter-in-law. Marge (voice of Julie Kavner) finds herself pretending to be Apu's wife as Homer hides out with his father at the Springfield Retirement Castle, where he finds assisted living agrees with him. But Mother eventually catches on that Apu is still single, and he's forced with great reluctance to marry a woman he hasn't seen in decades. "The Two Mrs. Nahasapeemapetilons" first aired on November 16, 1997. 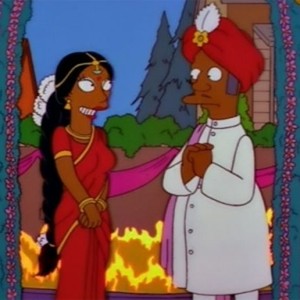