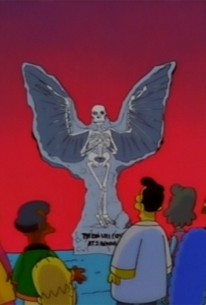 Lisa the Skeptic
The Simpsons Season 9

Lisa (voice of Yeardley Smith) learns that Springfield is soon to have a new shopping mall, but she's troubled by the fact that it's being built on a site where rare fossils had been discovered in the past. Lisa threatens to file suit against the developers with the help of cut-rate attorney Lionel Hutz (voice of Phil Hartman), but the businessmen agree to a compromise and allow Lisa to organize an archaeological dig on the property before construction is completed. While Lisa and her fellow students sift the soil looking for historical tidbits, someone finds what looks like a human skeleton with wings growing from its shoulders. Many Springfieldians are convinced the remains of an angel have been unearthed, and Homer (voice of Dan Castellaneta) wastes no time in taking the artifact home and charging people fifty cents a throw to see the artifact. Lisa, on the other hand, isn't so certain that they've found a divine creature, and takes a sample from the skeleton to eminent scientist Stephen Jay Gould (who provides his own voice) in hopes of determining just what the skeleton is. As a debate of faith versus reason sweeps the community, the "angel" disappears, only to reappear bearing a sign reading "The End Will Come at Sundown." "Lisa the Skeptic" was first aired on November 23, 1997. 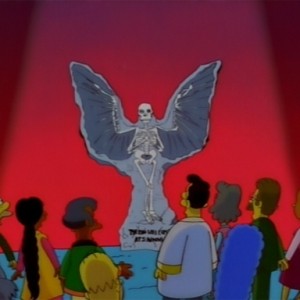