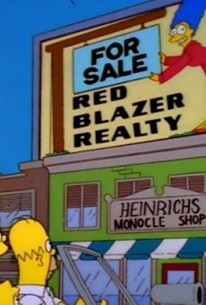 Tired of life as a stay-at-home mom, Marge Simpson (voice of Julie Kavner) is inspired by shyster lawyer turned real estate agent Lionel Hutz (voice of Phil Hartman) to pursue a new career selling houses. After passing the real estate exam, Marge is hired by Red Blazer Realty, but while she's excited about her new job, she soon discovers that her natural honesty is something of a liability -- her customers are grateful she tells the truth about a house's flaws, but it also keeps them from buying. Told she'll be fired if she doesn't make a sale soon, Marge has to unload a house where a multiple murder took place several years before. While Ned Flanders (voice of Harry Shearer) loves the place and is eager to buy, Marge feels guilty about not telling him about its bloody history. Meanwhile, Homer (voice of Dan Castellaneta) pays a visit to a police auction and buys a vintage muscle car confiscated from frequent jailbird Snake (voice of Hank Azaria), but when Snake sees Homer driving his pride and joy, he flees the honor farm to get it back. "Realty Bites" first aired on December 7, 1997. 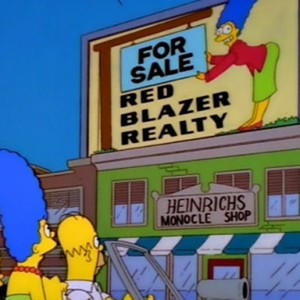