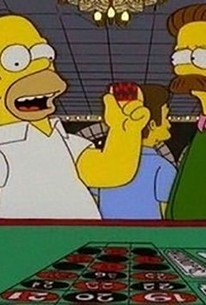 Homer Simpson (voice of Dan Castellaneta) sees his neighbor, aggressively perky born-again Christian Ned Flanders (voice of Harry Shearer), using a senior citizen's discount while shopping, and is convinced Ned is up to something. However, despite his appearance, Homer learns Ned really is sixty years of age, and chalks up his youthful looks to "clean living, chewing thoroughly, and a daily dose of vitamin church!" As Ned looks back at the straight and narrow life he's led, he wonders if there might be something to be learned from Homer's more adventurous way of doing things, and he asks Homer to give him a crash course in having fun. Homer agrees, and takes Ned with him for a trip to Las Vegas, where they gamble, watch stuntman Lance Murdock perform a dangerous motorcycle jump, and Ned has (gasp!) a white wine spritzer. The next morning, Ned and Homer wake up hung-over and disoriented and learn just how eventful their evening was -- they married a pair of cocktail waitresses who aren't interested in breaking up with their new hubbies just yet. First aired on January 10, 1999, "Viva Ned Flanders" features vocal cameos from Graeme Edge, Justin Hayward, John Lodge and Ray Thomas of the Moody Blues as themselves (who are shown playing in Vegas as an opening act for a Moody Blues tribute band). 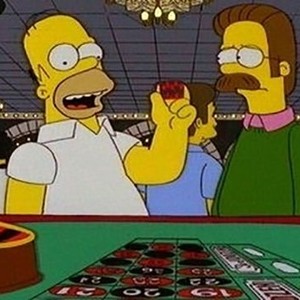