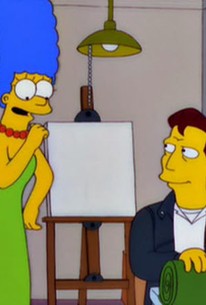 The Simpsons attend the annual rodeo at Waterville State Penitentiary after a disappointing visit to an Apron Expo, and Homer (voice of Dan Castellaneta) has a painful run-in with a bull. While at the prison, Marge meets a handsome convict Jack (voice of Michael Keaton), and while she's told he has such a reputation Bob Dylan wrote a protest song to keep him behind bars, Marge is certain he has a sensitive side that ought to be nurtured. Marge persuades the Warden (voice of Charles Napier) to let her teach an art class at the prison, and Jack soon becomes her star pupil. Swayed by Jack's charm, good looks and talent, Marge speaks out in favor of his parole, and once he's freed, helps him land a job at Springfield Elementary School, where Principal Skinner (voice of Harry Shearer) hires him to create a mural celebrating the school's motto, "Puma Pride." Jack's finished product, however, isn't what Marge or Skinner has in mind, and soon Jack lapses back into his criminal lifestyle. "Pokey Mom" first aired on January 14, 2001. 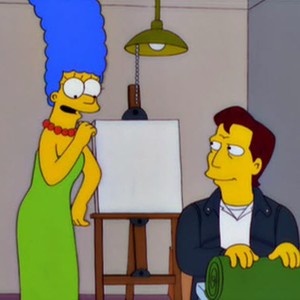