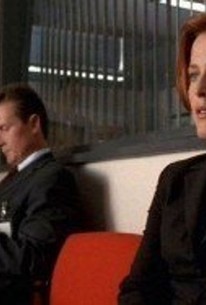 Within
The X-Files Season 8

This first episode of The X-Files' eighth season addresses several questions left unanswered by the cliffhanger ending of season seven. Namely, has Special Agent Fox Mulder (David Duchovny) really been captured by aliens, or has he merely gone AWOL? Who is the father of Agent Dana Scully's (Gillian Anderson) unborn child? And how did she become pregnant in the first place? She certainly can't remember. Assigned to locate the missing Mulder, Scully has been given a new partner, Agent John Doggett (Robert Patrick). The X-Files' recently appointed deputy director Kersh (James Pickens Jr.), a "non-believer," has ordered Scully and Assistant Director Skinner (Mitch Pileggi) to stop prattling all that "alien nonsense" and to stick to the facts at hand. Likewise, Doggett is as skeptical about the existence of paranormal forces as Scully used to be. Given this setup, it won't be an easy ride for the two new partners as they follow the trail of evidence regarding Mulder's disappearance to a small school in Arizona, where enigmatic young psychic Gibson Praise (Jeff Gulka), a character introduced in the fifth-season episode "The End," has taken refuge. Part one of a two-part story, "Within" originally aired on November 5, 2000. 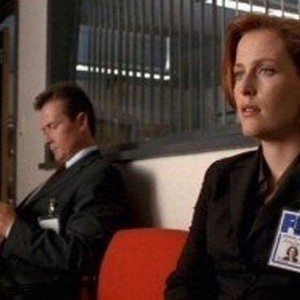