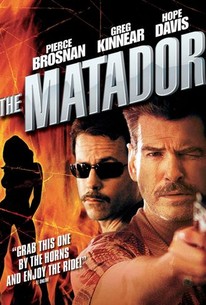 This humorously amoral, oddball comic thriller features strong performances by Pierce Brosnan and Greg Kinnear as a flamboyant, aging hit-man and an out of work suburban businessman, respectively.

A chance meeting between two middle-aged men leads one into a life of crime in this offbeat comedy. Danny Wright (Greg Kinnear) is an American businessman whose life has been going through a sour patch after he and his wife, Carolyn (Hope Davis), lost their young son. During a business trip to Mexico City, Danny strikes up a conversation in a hotel bar with fellow out-of-towner Julian Noble (Pierce Brosnan), and while Julian's loud and brassy manner initially puts Danny off, in time the two become friends, and Julian feels comfortable enough with Danny to tell him what he does for a living. It seems Julian is a hired killer working under the auspices of underworld kingpins Lovell (Dylan Baker) and Mr. Randy (Philip Baker Hall), and Julian tries to persuade Danny to help him with his latest assignment. Danny refuses, but a few months later a distraught Julian appears unannounced on Danny's doorstep. It seems Julian has blown his two most recent assignments due to a variety of psychosomatic illnesses, and now Lovell and Mr. Randy want him dead. Julian has also done something to put Danny in his debt, and the previously non-criminal businessman is forced to help his friend stage a hit, with Julian's presence in his home upsetting the precarious balance of Danny and Carolyn's marriage. ~ Mark Deming, Rovi

Israel Tellez
as The Matador

News & Interviews for The Matador

Critic Reviews for The Matador

Audience Reviews for The Matador