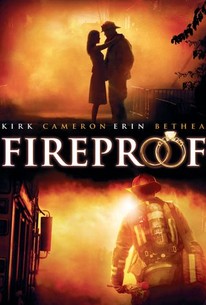 A heroic fireman locked in a failing marriage accepts his father's challenge to take part in a 40-day experiment designed to teach both husband and wife the true meaning of commitment in this faith-based marriage drama starring Kirk Cameron and Erin Bethea. When he's battling blazes, Capt. Caleb Holt (Cameron) adheres to the old firefighter's adage about never leaving your partner behind; back at home, it's an altogether different story. Caleb and his wife Catherine (Bethea) have been married for seven years, but lately arguments over career, housework, finances, and outside interests have driven the once-happy couple hopelessly apart. Just as Caleb and Catherine prepare to officially dissolve their marriage, Caleb's father John (Harris Malcolm) presents his son with a most unusual challenge: commit to a 40-day experiment called "The Love Dare," and take one last shot at saving his marriage. While at first Caleb agrees to take a chance on "The Love Dare," the discovery that it's closely tied in with his parent's newfound faith causes him to momentarily reconsider. Still, Caleb carries on with the experiment despite being constantly rejected by his skeptical, embittered wife. When Caleb asks his father how he can be expected to love someone who refuses to give him a fair chance, John tells his son that this is precisely the same love that God shows for humankind. Now, with a little help from above, the man who makes headlines for saving lives will fight to be a hero to the one person who matters most -- his wife. ~ Jason Buchanan, Rovi