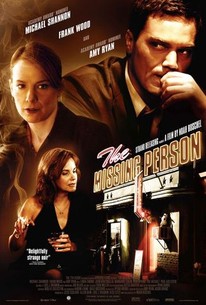 A sardonic, gin-soaked detective contends with an odd cast of characters while tailing a mysterious, middle-aged man traveling with a Mexican boy from Chicago to Los Angeles in writer/director Noah Buschel's twisting neo-noir mystery. John Rosow is a Chicago gumshoe whose skill for cracking a case often comes with a price; he has a penchant for getting in over his head, but he never loses his cool. Contacted by influential lawyer Drexler Hewitt and asked to shadow a man who is currently en route to Los Angeles with a young boy, Rosow collects his cash and instructions from Hewitt's gruff assistant, Miss Charley, and sets out on his latest assignment. Upon arriving in Santa Monica, however, Rosow is caught off guard when he learns that his objective has been updated. He is now to bring the man back to New York. For his efforts, Rosow will receive the tidy sum of half a million dollars. Later, as Rosow attempts to track down his target, a Segway-riding LAPD officer and a cab driver with extensive knowledge of the Catholic saints offer some helpful clues to the man's whereabouts as meddling FBI agents close in and a sensual femme fatale follows his every move. ~ Jason Buchanan, Rovi

News & Interviews for The Missing Person

Critic Reviews for The Missing Person

Audience Reviews for The Missing Person