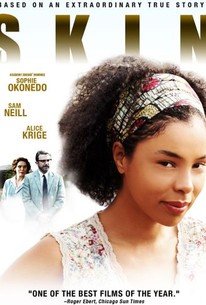 Sophie Okonedo, Sam Neill, and Alice Krige do wonderful work in Skin, delivering performances whose strength is underlined by the incredible real-life events upon which the movie is based.

A dark-skinned girl born to white South African parents attempts to explore her identity in the era of apartheid as her government, her parents, and society as a whole struggle with what it means to be a black child of Caucasian descent in a nation deeply divided by race. The year is 1955. Sandra Laing (Sophie Okonedo) has just been born to a pair of white Afrikaner parents, her brown skin and curly hair the surprising result of genetic throwback. As the government's rigid apartheid system struggles with whether to classify Sandra as white or black, the young girl and her parents gradually realize that the complications they face due to her appearance run deep and wide. Sandra lives in a society where the color of your skin determines the outcome of your life, and though she is eventually granted admission to an all-white school, she suffers endless torment from her intolerant classmates. Her father, Abraham (Sam Neill), is having a particularly difficult time accepting his daughter. Despite the fact that tests indicate he is her biological father, the neighbors constantly whisper behind their backs. And while Sandra's mother (Alice Krige) does her best to provide her daughter with understanding and emotional support, those consolations come at a high price for both mother and daughter. Her parents believe it's their daughter's birthright that she live as a white woman, though only after she grows up and falls in love with a black man will the conflicted Sandra finally find the strength to embrace her true identity as an African woman. ~ Jason Buchanan, Rovi

Zoea Alberts
as Girl in Classroom

Duane Saayman
as Boy in Classroom

Critics Consensus: This Is It Is Certified Fresh
View All