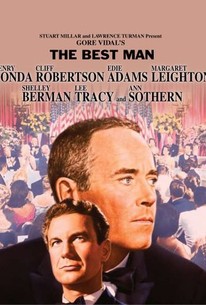 Gore Vidal adapted his biting and bitter political satire from his hit Broadway play. Franklin J. Schaffner directed and Haskell Wexler provided the sharp-edged cinematography. The story concerns the political back-biting and smear politics involved in a presidential election year scramble by potential presidential party nominees. Lee Tracy (in an Oscar-nominated performance and his final screen role) is Art Hockstader, a dying president who refuses to throw his support behind any of his party's presidential hopefuls. Hoping to get the nod as the party's presidential candidate is liberal do-gooder William Russell (Henry Fonda). His wife Alice (Margaret Leighton) wants to get a divorce from Russell but is delaying the divorce proceedings until after the party convention. Opposing Russell for the nomination is Joe Cantwell (Cliff Robertson), a slick and unscrupulous political monster who will use any bit of dirt to get ahead in the party. When he discovers that Russell once suffered from mental problems, he threatens to use it against him. Russell then finds out that Cantwell once had a homosexual relationship. Russell, who abhors smear politics, now has to decide whether to use the information against Cantwell or bury the secret and risk losing the nomination.

Mahalia Jackson
as Herself

Howard K. Smith
as Himself

Bill Stout
as Himself

Sherwood Keith
as Doctor
View All

Critic Reviews for The Best Man

Audience Reviews for The Best Man