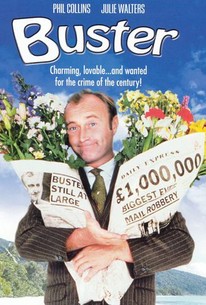 On August 8, 1963, the Royal Mail train, on its nighttime run from London to Glasgow, was robbed by 15 men who got away with 2.6 million pounds (today the equivalent of $35 million). Buster tells the story of one of the junior robbers, Buster Edwards (played by pop singer Phil Collins), in a crime that came to be known as the Great Train Robbery. The film details the planning of the famous heist, but its main concern is Buster's relationship with his family and his devotion to his wife June (Julie Walters). The Edwards are like a British Kramden family, trying to make ends meet from day-to-day in their rental apartment, but instead of a bus driver, Buster is a two-bit thief who has the fine luck of hardly ever getting caught. After the Royal mail train robbery, the heat intensifies, since the Conservative Government, already smarting from the Profumo scandal, latches onto the train robbery as a means to deflect attention from the scandal by bringing the train robbers quickly to justice. Buster and June go into hiding and have a series of close calls before finally escaping to Mexico. Finally in paradise, the Edwards find their money quickly being eaten up and discover that they cannot adapt to the Mexico milieu. June, for her part, is homesick, and Buster, always ready to keep her happy, makes the grand gesture -- to return to England and turn himself in to the police.