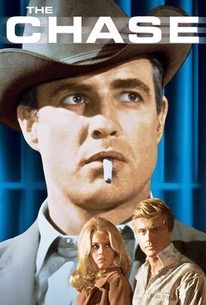 Arthur Penn directed this atmospheric melodrama with a stellar pedigree (scripted by Lillian Hellman and based upon a play by Horton Foote) and a checkered production history. Penn later disowned the film, complaining that producer Sam Spiegel constantly interfered during production and later barred him from the editing room. "I have never made a film under such unspeakable conditions," Penn said. "I was used merely to move the actors around like horses." The Chase takes place in Tarl, a Texas town lorded over by Val Rogers (E.G. Marshall), the local banker. When convict Bubba Reeves (Robert Redford), a hometown Tarl boy, escapes from the state penitentiary, the town becomes polarized into two camps -- those who think Bubba is guilty of murder, and others who are convinced of his innocence. Sheriff Calder (Marlon Brando) thinks Bubba is innocent and will come back home. Calder, however, has other problems to contend will besides Bubba. Bubba's wife Anna (Jane Fonda), for instance, has been having an affair with his best friend, Jake (James Fox), who happens to be Val Rogers's son. Meanwhile, Ruby (Angie Dickinson), Calder's wife, tries to protect her husband from the turmoil in the town. But, after Calder is sent in to try to control a wild party, he is beaten by an angry mob of partygoers. At the same time, Bubba arrives in town. When word gets out that Bubba is hiding in an automobile junkyard, Calder tries to get to Bubba before the townsfolk do, and take him into safe custody.

Critic Reviews for The Chase

Audience Reviews for The Chase