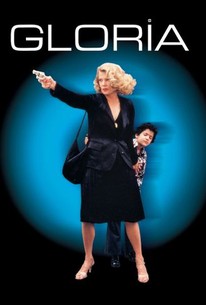 Gloria (Gena Rowlands), a self-involved woman in her forties who was once a mobster's mistress, is asked to look after Philip (Juan Adames), the son of her Mafia-connected Puerto Rican neighbors. This temporary set-up becomes permanent when the neighbors are killed in a mob hit. Philip has in his possession a diary containing a record of illegal Mafia activities; thus the boy is as good as dead unless Gloria takes decisive action. With Philip in tow, Gloria leads the hit men on a frantic chase around Manhattan, and during the various gunfire exchanges, more than holds her own. Offering to exchange the diary for the boy's life, Gloria is rebuffed by the vendetta-driven assassins. Where once she was content squirreling herself away in her lonely apartment, Gloria now must face a lifetime on the run. Directed on a more commercial level than was customary for John Cassavetes (with a subversive streak of self-parody in the bargain), Gloria served as an excellent showcase for Cassavetes' wife Gena Rowlands. The film won the Golden Lion Award at the 1980 Berlin Film Festival. ~ Hal Erickson, Rovi

Gregory Cleghorne
as Kid in Elevator

Asa Quawee
as Cab Driver No. 2