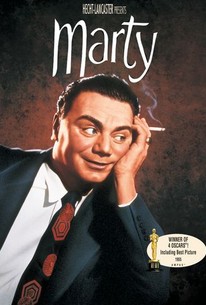 1:56
Marty: Official Clip - What Do You Feel Like Doin' Tonight?

2:59
Marty: Official Clip - I Have a Feeling About You

2:13
Marty: Official Clip - All I Wanted Was a Lousy Kiss

1:15
Marty: Official Clip - I Got Something Good Here

2:21
Marty: Official Clip - College Girls Are One Step From the Street
View All Videos (10)

Paddy Chayefsky's Oscar-winning slice-of-life drama originated as a live 1953 broadcast directed by Delbert Mann on The Philco-Goodyear Television Playhouse starring Rod Steiger and Nancy Marchand. The Hecht-Lancaster movie version, also directed by Mann, replaces the two leads with Ernest Borgnine and Betsy Blair (as well as featuring several soon-to-be-familiar faces, including Jerry Paris, Frank Sutton, and Karen Steele, plus Joe Mantell, Nehemiah Persoff, and Betsy Palmer from the TV version). But it remains otherwise intact, telling of 24 very important hours in the lives of two lonely people. Marty is a bittersweet, sometimes funny, sometimes poignant, and always realistic comedy-drama about Marty Pilletti (Ernest Borgnine), a 34-year-old Bronx butcher. Approaching middle-age as a burly, somewhat overweight man who has no illusions about himself or his attractiveness to women, Marty looks forward to just one thing in life -- buying his boss's butcher shop and trying to make a success in business -- and he's even uncertain about that. A gentle, good-natured man, he lives with his mother (Esther Minciotti), a kind but emotionally smothering woman, in a too-large house and spends his time with a small circle of dead-end friends (Joe Mantell, Frank Sutton). One Friday night, Marty's mother convinces him to go to the Stardust Ballroom, where he meets a plain-looking schoolteacher named Clara (Betsy Blair), whose life appears to mirror his own -- she lives with her father, and is frightened about the one prospect she has for advancement in her job. Meeting her after witnessing a humiliating rejection by her blind date, Marty acts on his best impulses and asks Clara to dance, and soon they are actually enjoying each other's company. She is as drawn to him as he is to her, but both are so uncertain about putting themselves at risk emotionally, that the evening almost ends badly when he tries to kiss her -- but they agree to talk on the phone and go to a movie the next night. But whatever good feelings he has about Clara are soon threatened by his friends' put-downs of her, and his mother's hostility, driven by her sudden panic that if Marty marries, she'll be left living alone. Marty spends the next day alone and never does call Clara, seemingly having decided that it's best to leave well enough alone. That is, until he takes a good long look at his life, and a listen to his friends -- and he suddenly makes the decision to try for true happiness, wherever it leads.

Walter Kelley
as The Kid