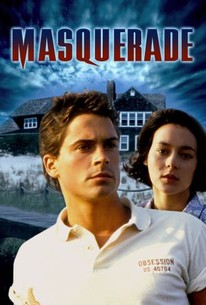 Bob Swaim directed this thriller about a killer stalking a recently orphaned heiress in the Hamptons. Rob Lowe is Tim Whalen, a yacht captain hired by a rich millionaire to get his boat into shape for the upcoming racing season. Whalen is spending most of his time, however, with the rich man's wife, Brooke (Kim Cattrall). Olivia Lawrence (Meg Tilly) is an introverted and dreamy woman whose mother has just died, and is living in her Hampton mansion with her mother's fourth husband, a nasty dunk named Gateworth (John Glover). While Olivia's childhood friend, local police officer Mike McGill (Doug Savant), secretly pines for her, Olivia meets Whalen at a dance and it's lust at first sight. Having a tryst at Olivia's mansion while she thinks her stepfather is away for the weekend, they are surprised by a drunken Gateworth staggering into the bedroom. Whalen and Gateworth fight, and Gateworth ends up dead. Mike suspects foul play and Olivia tries to protect Whalen. But then murders keep occurring in the Hamptons and Olivia finds herself victim of several attempts on her life.

Erik Holland
as Chief of Police

Michael Tadross
as Kid on Dock

Bob Swaim
as Man in Diner