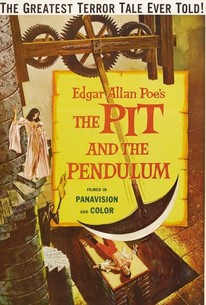 American-International's standing "haunted castle" set is exhibited to peak advantage in Roger Corman's Pit & the Pendulum. Save for the climax, Richard Matheson's script bears but little resemblance to the Edgar Allen Poe original, though there are pronounced echoes throughout of Poe's The Premature Burial. Vincent Price stars as Nicholas Medina, the son of a notorious Spanish Inquisition torturer. Nicholas' wife Elizabeth (Barbara Steele) has died under mysterious circumstances, prompting Elizabeth's brother Francis (John Kerr) to arrive at the Medina castle to investigate. The tormented Medina believes that Elizabeth was buried alive, and is convinced that he can hear his wife's voice calling out to him. In truth, Elizabeth has faked her death, part of a plan concocted with her lover Dr. Leon (Anthony Carbone) to drive Medina mad. She succeeds in this goal (albeit to her own grief, as the film's very last shot reveals), pushing Medina over the brink. Convinced that he's his own father, Medina dons Inquisition robes, straps Francis to a table, and arranges for a huge steel-bladed pendulum to slowly, slooooowwly descend on his helpless victim. You'd never know that Pit & The Pendulum was shot on the budget and schedule of a B western; the film is consistently good to look at, with eerily evocative color camerawork (Floyd Crosby) and sumptuous art direction. Stock footage of the climactic torture sequence would later find its way into the 1966 spy spoof Dr. Goldfoot and the Bikini Machine, which also starred Vincent Price.

Patrick Westwood
as Maximillian the Butler

Larry Turner
as Nicholas as a Child

Charles Victor
as Bartolome
View All