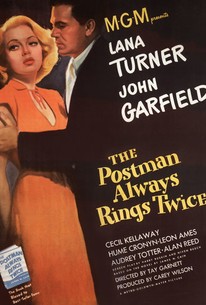 The Postman Always Rings Twice spins a sultry web of mystery with a gripping adaptation of a classic noir tale.

James M. Cain's novel received its first authorized screen treatment in this MGM production. Drifter Frank Chambers (John Garfield) takes a job at a roadhouse run by slovenly but likeable Nick Smith (Cecil Kellaway). Nick's sexy young wife Cora (Lana Turner) takes an immediate liking to Frank, but he senses that she's trouble and he keeps his distance--for a while, anyway. Inevitably succumbing to Cora's tawdry charms, Frank enters into her scheme to murder Nick and claim the old boy's insurance money. Not long after committing the foul deed, Frank and Cora are arrested. Thanks to the conniving of slimy attorney Arthur Keats (Hume Cronyn), the illicit lovers are able to beat the murder rap--but, as the film's title symbolically indicates, they eventually pay for their misdeeds in an unexpected manner. Fans of the James M. Cain original--not to mention Cain himself--were aghast at the changes made in the novel by screenwriters Harry Ruskin and Niven Busch; many of the alterations were made to conform with censorship standards of the era, while others simply existed to massage the egos of the stars. Even so, the 1946 version of The Postman Always Rings Twice is infinitely more satisfying than the no-holds-barred 1981 remake, directed by Bob Rafelson with Jack Nicholson and Jessica Lange.

Cameron A. Grant
as Willie

Paula Ray
as Woman
View All