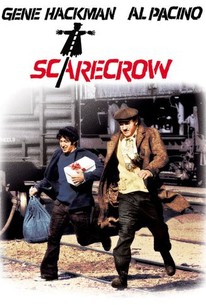 An ex-con learns the value of friendship in Jerry Schatzberg's picaresque road movie. Trying to hitch a ride on a desolate California road, fresh-out-of-prison Max (Gene Hackman) meets ex-sailor Lion (Al Pacino). They are both headed east, as Max dreams of opening a deluxe car wash in Pittsburgh and Lion believes that the wife and child he left behind will still welcome him home. The two decide to journey together, forging an increasingly deep yet uncertain friendship, as Lion teaches Max how not to be so pugnacious and Max senses Lion's fragility. When the pair hits Detroit, Lion finally gets in touch with his wife and discovers how she really feels. When Lion is shattered by the revelation, Max must decide if he should forge on alone or sacrifice his carefully guarded savings to help his friend. One of a cycle of late 1960s-early 1970s buddy movies that included Midnight Cowboy (1969) and California Split (1974), Scarecrow suggests how alienated men had become from such traditional institutions as marriage and family. Max's and Lion's salvation comes from being on the road with each other, rather than settling down with jobs and families. Pacino's first film after his triumph in The Godfather (1972), and Hackman's follow-up to The Poseidon Adventure (1972) and his Oscar for The French Connection (1971), Scarecrow won the 1973 Palme d'Or at the Cannes Film Festival, but the two stars were not enough to make it a hit. Even so, their nuanced performances enhance this moody study of contemporary dislocation. ~ Lucia Bozzola, Rovi

Rutanya Alda
as Woman in Camper
View All